The Organization of American States (OAS)

The Organization of American States (OAS) was established by charter in 1948.  It replaced an earlier organization, the Union of American Republics (commonly known as the Pan American Union), making it the world's oldest regional inter-governmental organization.  Currently all 35 independent nations in the Western Hemisphere are member states of the OAS.

The OAS's mission is to promote human rights, democracy, regional security, and regional economic development by facilitating dialog and cooperation among its member states.  Much of the OAS's work in the field of human rights is accomplished through the drafting of multilateral treaties.

The Inter-American Commission on Human Rights

The Inter-American Commission on Human Rights is an official organ of the OAS, governed by an OAS-authored statute.  It is based in Washington, D.C., but often conducts field work and holds hearings in other jurisdictions.  The Commission plays a dual role, functioning as both a "charter organ" and as a "treaty organ."

The Commission's primary working languages are Spanish and English.  Commission documents and publications are often available in both languages.  Visit the Commission's website to access to the following:

The Inter-American Court of Human Rights

The Inter-American Court of Human Rights is also an official organ of the OAS.  It was established in 1979, upon the entry into force of the American Convention on Human Rights, and is located in San José, Costa Rica.  The Court's principle role is to act as the final adjudicator of petitions seeking redress for the violation of rights guaranteed under the Convention.  It also issues advisory opinions.

Bear in mind that the the Coutr's working language is Spanish.  Substantive judgments in contentious cases are translated into English, but most other Court documents and publications are only available in Spanish.  The Court's website provides access to the following materials in English:  the Court's governing statute, its procedural rules, its annual report, and a brief history.

Case Law of the Inter-American Court of Human Rights

IACHR Jurisprudence Finder
The Court's free database offers the most comprehensive coverage of its jurisprudence and related documentation, but it can only be searched effectively by using Spanish search terms.  The database includes English translations of final judgments in contentious cases, and sometimes also English summaries (abstracts) thereof, but it often takes years for these translations to be added to the database.  Other documents, such as provisional measures and advisory opinions, are only available in Spanish.

To quickly retrieve a judgment from a known case, it is often more efficient to use this browsing menu.  Begin by selecting the defendant state party (country).  Then browse chronologically by year of decision, beginning with the most recent.  Visit this page for status information about pending cases awaiting a decision on the merits (Spanish only).

The following resources selectively publish English translations of the most significant judgments issued by t﻿he IACHR, along with explanatory headnotes and other editorial enhancements.  These commercially published translations usually become available much sooner than the Court's own translations.

The Organization of American States 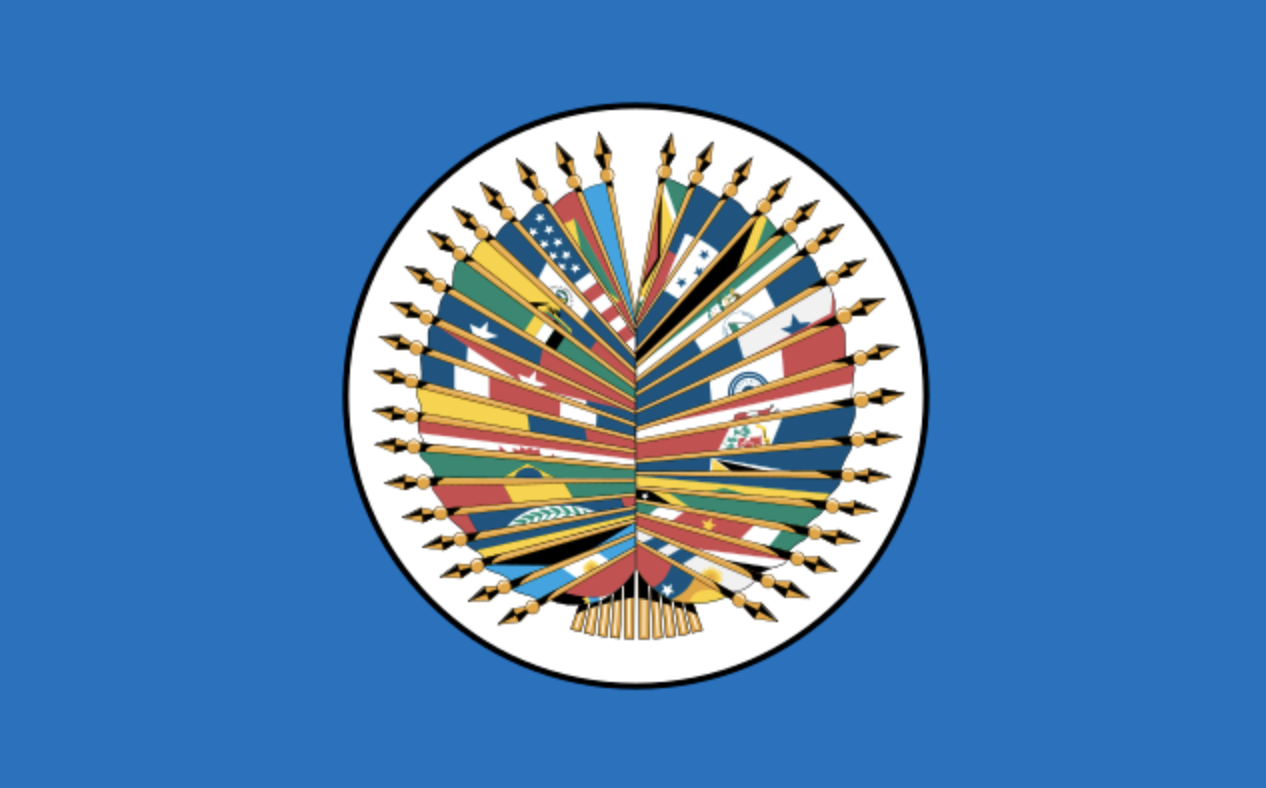 Flag of the OAS.  Image by Sodacan via Wikimedia Commons.
CC BY-SA 4.0 license.

To locate additional materials on the Inter-American Human Rights system from the Georgetown Law Library's collection, use the Advanced Search and select Law Library Catalog.  Then select Subject as the search field and search for one of the following subject headings as an exact phrase:

For greater precision, use the first line to search for one of the subject headings listed above, and use the remaining lines to search for additional words or exact phrases using the default Any Field setting.

The Inter-American Commission on Human Rights 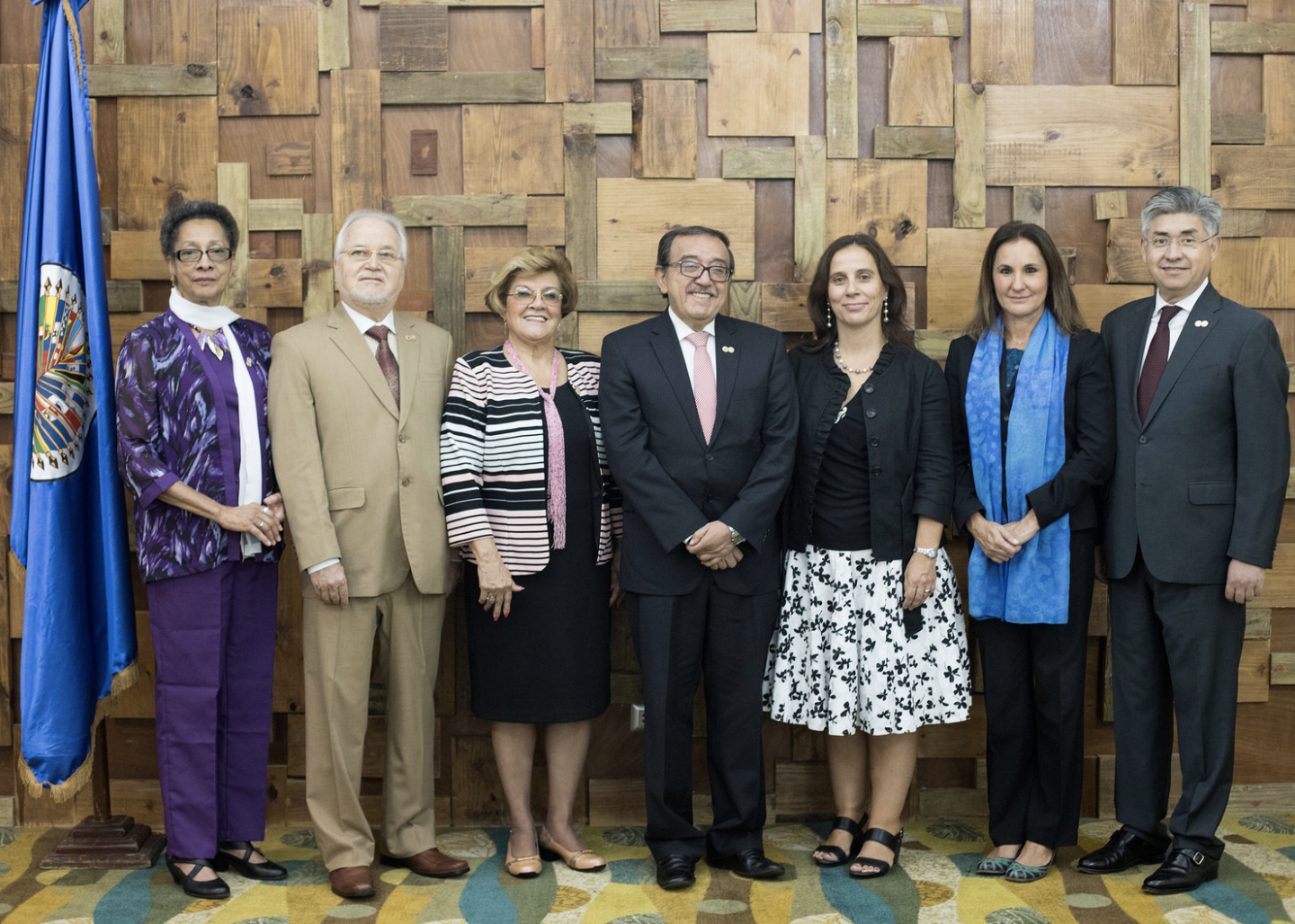 Members of the Commission, 2018
Photo by Fran Afonso via Flickr. (CC BY 2.0 license)

The Inter-American Court of Human Rights 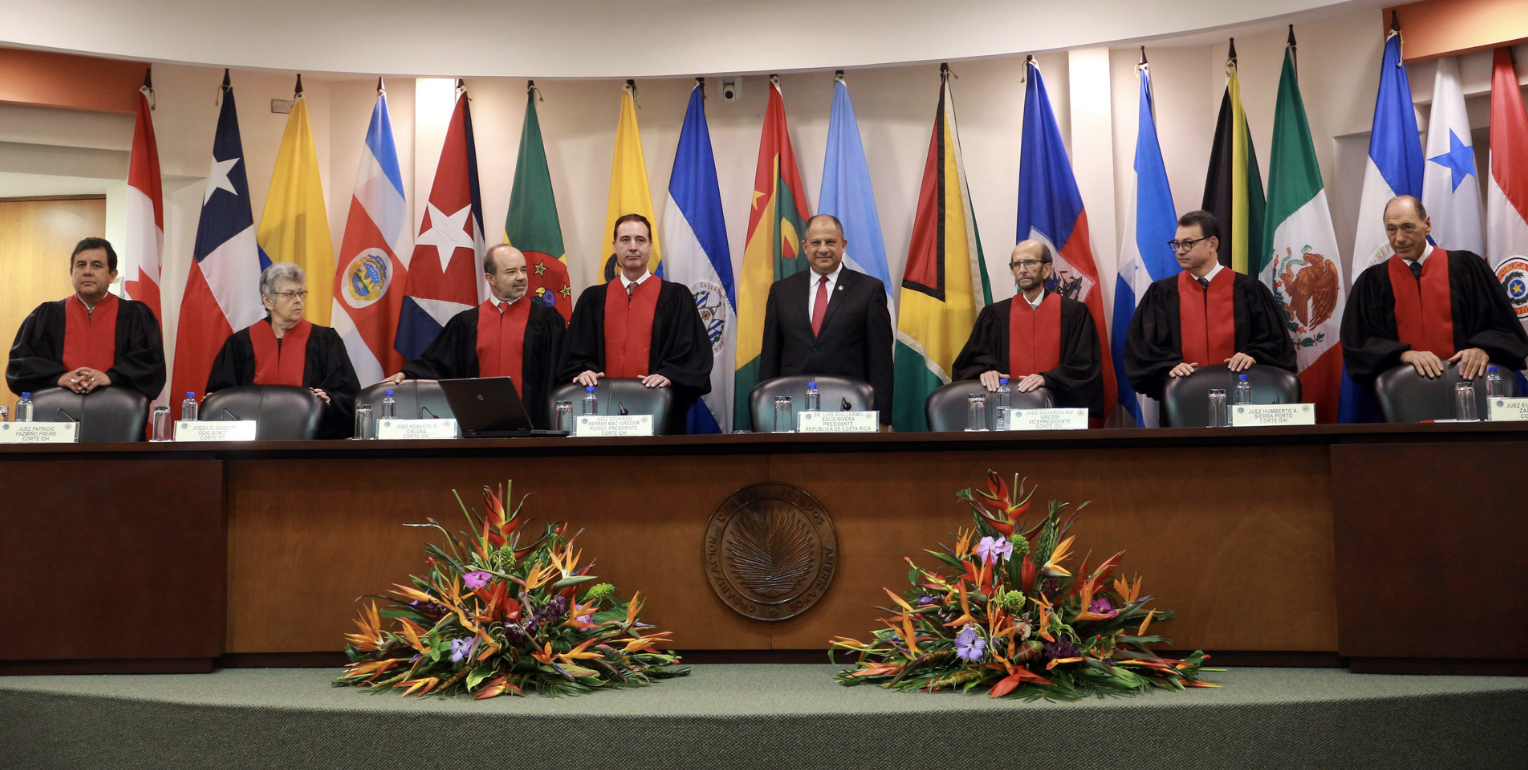