This State Guide provides an in-depth look at sources of law within the District of Columbia. 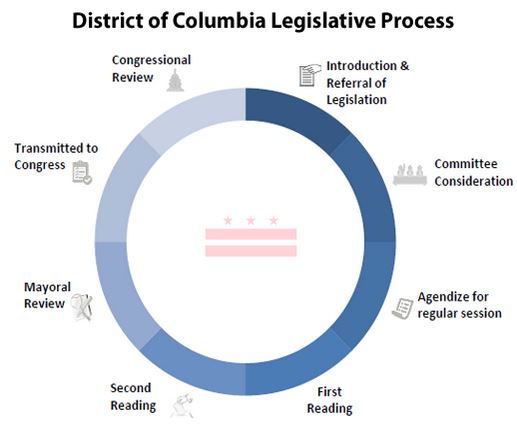 There are 13 council members - a representative from each of the eight wards and four members elected at large, and the Chair. The Council was given power to enact laws, but D.C. legislation and budgets are still subject to Congressional and presidential approval.

A bill is introduced by Council members. The Mayor can request the introduction of a bill and the Chair of the Council may introduce that bill as a courtesy. The Bill is given a bill number such as B15-0606, "Choice in Drug Treatment Advisory Commission Amendment Act of 2004" and assigned to the appropriate committee(s). The bill number tells us that it is the 606th bill introduced in the 15th Council Period (Each Council Period lasts for 2 years, starting January 2nd of an odd-numbered year and lasts through January 1st of the following odd-numbered year).

The Council Chair assigns the bill to the appropriate committee(s). If a public hearing or roundtable is held, a notice will be published in the D.C. Register for public comment 15 days in advance of a scheduled public hearing. The committee may mark up the bill and vote to recommend that the Council approve or disapprove the bill. The committee may take no action and let the bill die. If the committee reports the bill out, the Council officers review the legislation and report to the Committee of the Whole whether the record is complete and in proper legal or technical order. Council members do not debate the bill at this stage, but can ask for clarification or explanations. The Chairman will place the bill on the legislative meeting agenda with the approval of the Committee of the Whole.